I finished the artwork for the still untitled book about a bear at the end of December.  The plan was to clean up the artwork and letter the text in Photoshop and have it ready to submit to publishers by the end of January.  Ladies and gentlemen, that did not happen.

Here’s why: I didn’t like the artwork.  I had a nagging feeling the entire time I was working on the book that the art style I was using wasn’t the right way to go.  From the early days of the book, I found that the more simple the book was, the better I liked it.  I wrote three drafts of the book and it kept getting simpler and smaller and more direct.  As I worked on sketches for the book, the simpler the art was, the more I liked it.  Once I settled on focusing on the characters, dropped all backgrounds and kept the artwork simple and bright and only drawing what was necessary, the more I felt I was on the right track.

So, what’s the problem?  Didn’t I do that?  Well, yes.  Last year I had committed to learning how to paint and falling back in love with it.  It was good to stretch my creative muscle and do something besides comics.  As I started work on the book, it felt like the most obvious thing in the world to do was to paint the book.  So, I got to work.  I penciled the characters, painting it, and then used a brush pen to define the characters.  And…it was okay. 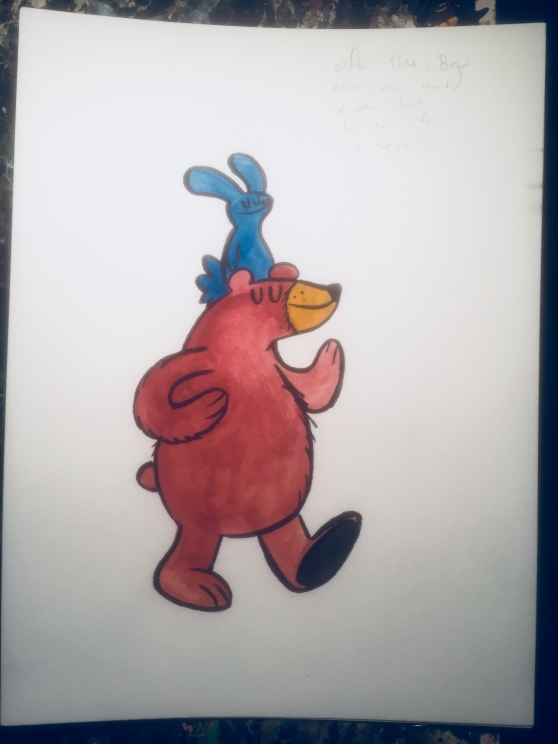 As I neared the end of the book, I started to wonder if I made the right choice.  I felt like I was simply coloring the book, as opposed to painting it.  The characters, such as bear in the picture above, looks splotchy and uneven.  I should have used different tones of the colors and defined the characters with paint and not relied on the black ink so much.  In short, the art was not taking advantage of the strengths that paint can offer.  This ultimately lies in the fact that I am not a good enough painter to paint a book.  I painted a little almost every day last year, but I have some ways to go.

Another problem is that I needed to scan in the art and clean it up in Photoshop.  I looked into how to scan in watercolor art online but to be honest, my scanner isn’t a very good scanner.  If I need to scan in black and white line work for The Retros, sure, it works just fine, but this is a different level.  My Photoshop skills aren’t that hot, either.  Once I scanned in the artwork and started to mess around, I realized I was kinda…well, screwed.  The scanned artwork looked terrible, and after fiddling around with it in Photoshop, it still looked awful.  There’s no way a publisher would like this.  I knew that my skills as a painter weren’t up to snuff and my limited abilities in Photoshop were not strong enough to compensate for that.  Getting a book published is almost impossible.  An editor will look at the story, the characters and the art and the art needs to spark interest right away.  My book’s art was not very good.  No editor would give it a chance.

Here’s the first page, scanned, with no Photoshop magic: 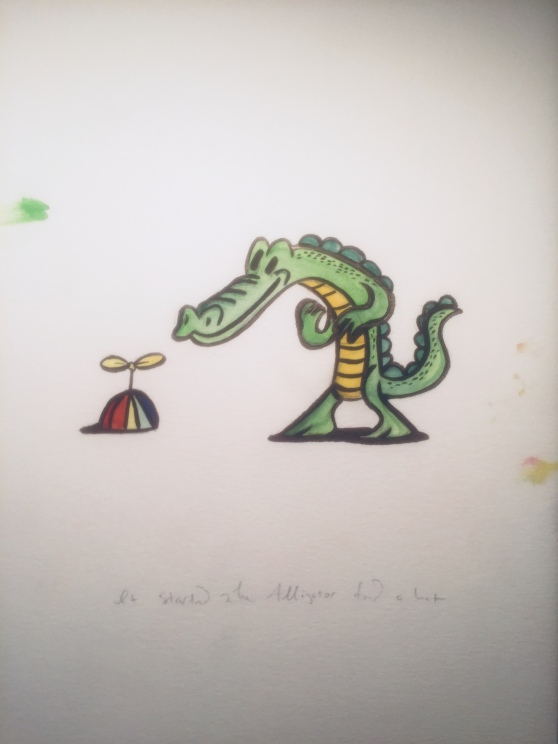 I played around with it in Photoshop but ultimately felt that the artwork needed to have a better scan to work with.  Desperate, I took a photo of the art with an iPhone and tried fiddling with it that way: 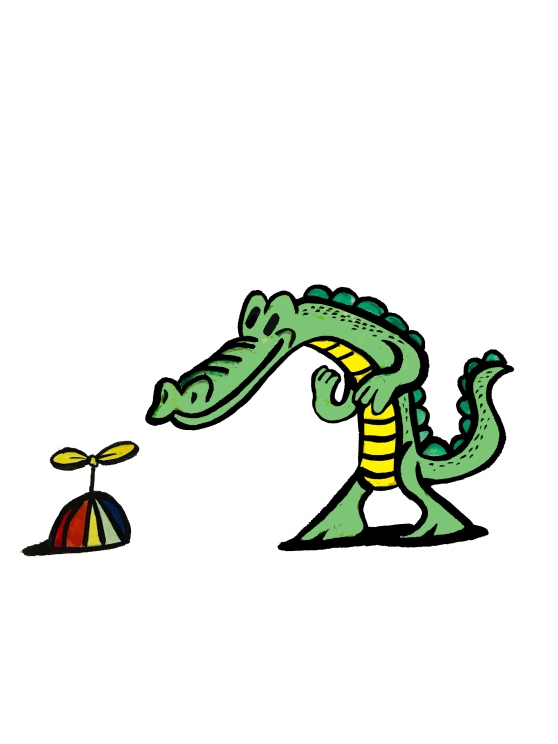 I still believed in the story and was determined to finish the book.  I started to play around with simpler art and tried coloring with Photoshop, the way I color The Retros. 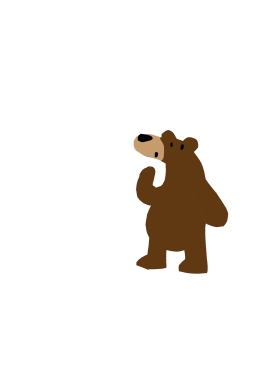 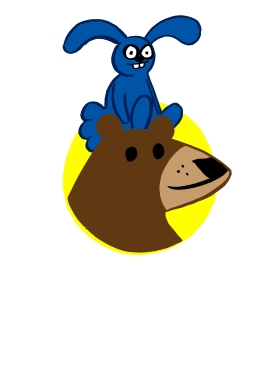 This felt…well, it felt like a turn in the right direction.  It was playing to my strengths and embracing the approach I had been using since the first few drafts of the book of simplifying.  Was this the right decision though?  What would an editor think?  When I was shopping The Retros as a newspaper strip I reached out to a few professional newspaper cartoonists I knew and asked for their advice.   I received some encouragement and advice and the best thing I was told was to not make it easy for an editor to say no.  I remembered that advice as I looked at the bear book and realized there was a lot of reasons for an editor to say no to this.  I’ve never been published before, the children’s book market is over saturated, and the artwork looked terrible.  I decided to play to my strengths and redo the book.

The creative process wasn’t that different, though.  I penciled the art, inked it with a brush pen, scanned it and colored it, just like I do with The Retros.  Here’s the new first page to compare to the artwork above: 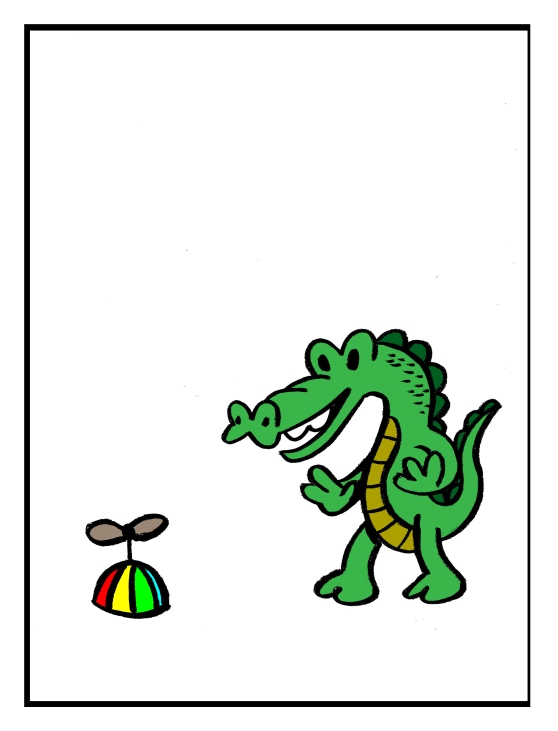 After I did a few more pages, I realized that this was the way to go.  In order to keep sending a project out to hundreds of editors and agents you need to be confident and excited about it.  It needs to be the best thing you can create.  The previous painted version was not that.  Maybe in a few years painting a book might be the way to go, but not now.

Redoing the art also gave me a chance to rework a few things.  Here’s the first and second versions of one of the pages: 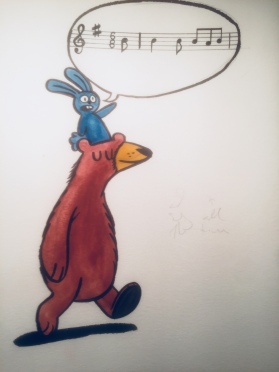 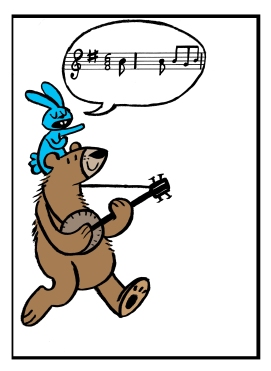 The bear is sill happy, the bunny is still singing but the banjo?  Man, that banjo sells it.

I am halfway through redoing the book and I should have it done and lettered by the end of the month.