October is half-over and that means we are at the mid-point of Inktober, the month long, well, let’s call it a challenge, to create an original ink drawing each day throughout the month.  This is my second year participating and this time I am drawing characters that appeared for the first time in what is now known as ‘The Fourth World’ series by comics legend Jack Kirby.  Last year I did characters from ‘The Hobbit’ and I think I know what I might do next year.

When Kirby left Marvel Comics for DC in 1970, he envisioned a story that would have a beginning, middle and definitive end that would be spread across four different titles.  The original name for this epic was titled ‘The New Gods’ but that name ended up being used for

the title of one of the books and the story line was dubbed ‘The Fourth World’ by fans.  Creating a comic with the intention of ending it was unheard of at the time.  That, coupled with the often bombastic storytelling and sometimes underwhelmed reaction from readers made DC really hesitant with this idea.  Over a course of a year and a half, the titles started to get cancelled, but not before DC stepping in with some editorial…suggestions.

Eventually Kirby was allowed to return to the 4th World to finish his story…but not really.  He was given a chance to wrap up the tale in a graphic novel but it proved to be impossible to wrap up such a sprawling story in only 48

pages.  Since the original publication, ‘The 4th World’ has gone on to be recognized as pure Kirby, the chance (for a while, anyway) to create a comic his way.

I love reading this sage.  It’s…insane at times.  It moves along at a breakneck speed, storylines are dropped, characters are never seen again and the connection to the proper DC universe is often tenuous.  The dialogue is wordy and almost every single sentence ends with at last two exclamation marks.  I can totally see why it left a lot of readers and editors scratching their heads.  It went against expectations and didn’t fit the convention of a typical comic.  It was a new era of comics, but nobody knew it at the time.

But it’s pure, unleashed Kirby.  The energy and imagination just jumps off the page and continues to 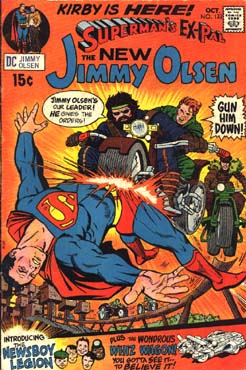 blow me away whenever I reread it.  It’s far from perfect, but I love the flaws, too.  Even if you’re not a Kirby fan, I think it’s pretty essential reading as even now it feels ahead of its time.

I am having a lot of fun with these characters.  Unlike last year when I tried to avoid drawing the characters too close to the Uptown Girl style, I am approaching these characters as what they would look like if they were in The Retros.

But I suppose this intention is kind of irrelevant as I have pretty much only one style.

The month started strong with ‘Mister Miracle’.  I am posting the drawings on Facebook, Tumblr and Twitter, and before Inktober I had about 120 followers and having a tweet re-tweeted or liked by more than two people was not very common.  But something…miraculous (sorry) happened on the first day.  Tom King, the writer of the current Mister Miracle series, stumbled across my drawing and retweeted it.  And over the course of an hour, I watched the drawing get retweeted and liked at a pace I’ve never seen before.  When the dust settled, that drawing was retweeted 30 times and liked 161 times.  I picked up a few followers and it felt…well, it was pretty incredible.  The next day (Barda) got 3 retweets and 9 likes and that was the end of that.  It was a fun ride while it lasted and gave me a much needed boost of encouragement.

I am looking forward to finishing up this challenge and moving onto my regular and new projects.  My recent freak-outs and spirals of frustration have dissipated and I think I know what I am working on come November 1st.

3 thoughts on “The New Age”