I had a different idea for this post that was going to be all about panels that suck but I decided to hold off a little bit because some of the panels that I wanted to feature are pretty spoiler-y and I decided to wait.  Not that I am in short supply of panels that suck, but I wanted to show the original version, explain why it sucked and then show the revised panel that doesn’t suck  as much, or at least sucks in a different way.

Instead we’ll talk about… 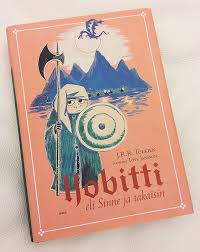 I’ve mentioned before how this is my favorite book and it is pure comfort reading.  I reread it about twice a year and I know it pretty well at this point  I can’t say that I like the ‘Lord of the Rings’ very much, or at all, but I love this book.  As I get closer to wrapping up the last Uptown Girl book, I am starting to get excited about doing more projects that are simply for fun and Inktober is one of them.  Inktober is a month long challenge in October for cartoonists to draw a new picture every day for a month and post it on social media.  At the end of September this year many of my cartoonist friends were gearing up for the challenge.  I was rereading ‘the Hobbit’ around this time and was reading the annotated version that not only had footnotes that touched on more of the mythology of Middle Earth but also explained things like Bilbo reading his morning letters (apparently in England mail was delivered twice a day at one point).  The book also showed art from the illustrated versions of this book from around the world.  I loved seeing the differences but really fell in love with Tove Jansson’s drawings.  Look how cool these are. 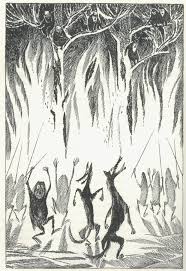 I think she captured the cartoony look of the characters that I always pictured them and the drawings themselves, regardless of the source material, are just beautiful.

At any rate, as I was reading this I started to think how fun it would be to draw some of my favorite scenes like Gandalf rescuing the dwarves from the trolls or Bilbo talking to Smaug.  I thought about how I would draw the characters and what they would look like.  The next day I was on the Stairmaster (I get a lot of ideas exercising) and decided Inktober was a perfect way to play with this idea.

Over the course of the month, I ended up drawing a different character from the novel.  It was fun and a challenge as the book doesn’t have that many characters in it.  In order to get through the whole month I ended up having to draw characters like Roac and the elf butler.  Actually, Roac ended up being one of my favorites.  I was also glad that there were so many dwarves but it wasn’t always easy to come up with a fun way to draw them. 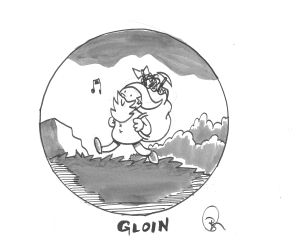 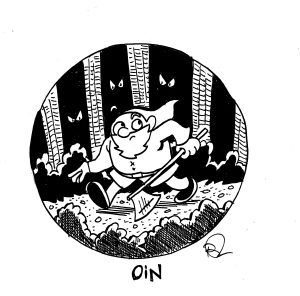 I put a lot of time into this challenge, more than I had planned . The appeal of Inktober for a lot of cartoonists is to draw something kind of quick and although these drawings aren’t too detailed, most of the drawings are the second or even third versions as I wasn’t happy with them the first time.  At first I was overthinking many of the drawings or not taking enough risks.  I wanted break away from my typical style and try new things.  It was hard.  The first time I drew Bilbo he was too…well, I would never describe my work as realistic but it wasn’t simple enough.  It was a bad drawing of someone that wouldn’t look too out of place in an Uptown Girl book in terms of how he was drawn.

I didn’t get too far but I knew that this was wrong.  If the whole month was going to be this way there was no point in doing it.  I wanted to try something new and if I wasn’t going to break away from my typical style there was no reason doing this.  It would be just one more thing to distract me from my other projects.  The drawing also failed to capture the spirit of the character and the lightheartedness of the story.  So, I redrew it.

And I think I nailed it.  I am not saying it’s the best drawing in the world or anything but it captured how I think of the character and helped set the standard that I wanted to maintain for this little unplanned drawing adventure.

The next day I drew Bard and again I ran into the same problem.  He looked like he belonged in the Uptown Girl book ‘The Long Forgotten Fairytale’.  Not that there’s anything wrong with that, but I had drawn my share of characters like that already.  I wish I could find the first attempt but again, I was much happier when I broke from my normal drawing instincts and drew in a looser, simpler style.  I say simpler but this is still a pretty detailed drawing.  But I like it.  I thought that Bard and Bilbo were among the drawings I liked the most of all the art I’ve done in the last few years but not because they were amazing but because I was happy that was I able to draw a new style that I felt looked pretty good.  I was excited for the rest of the month.

The dwarves were fun and annoying at the same time but instead of just drawing 13 characters with beards I decided to draw different scenes from the book, whether it was hanging in a tree as they ran from the Wargs or eating or running in fear. 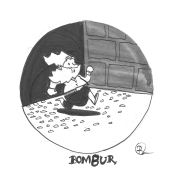 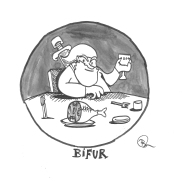 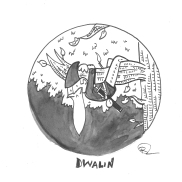 I liked Thorin because in a way I was taking him down a peg.  The entire book he’s described a fierce grim warrior but in reality he’s kind of a jerk.  Instead of portraying him in battle I decided to show him paying his harp.  Not that you can’t be a warrior and a harpist, of course.  Here’s the first attempt and the final version.  It’s not the best drawing of the month but it’s probably not how a lot of people think of him.

I had a ton of fun on this challenge and I am excited for next year.  It also got me excited about having more time once Uptown Girl comes to a close to do stuff like this.  You can see the rest of the month by poking around my Twitter feed.

5 thoughts on “An Unexpected Journey”