All I do is draw comics, read comics and think about comics.

Well, it’s not all I do but it sure feels like it.  And all this drawing, reading and thinking is all done to hopefully create a life where all I do is draw comics.  You know, for money.

Money isn’t the only reason I do what I do but I’d sure like to be able to earn a living doing what I love.  I’m not ever going to ever quit trying to make this happen, I’ll never stop drawing comics even if I can’t make a career of it.  This is the hill I am going to do die on.

Except for the two weeks in first grade when I wanted to be a paleontologist, I’ve always wanted to be a cartoonist.  When I discovered newspaper comic strips, specifically Peanuts and later Calvin and Hobbes, I knew what I wanted to do with my life.

I took a detour for about…13 years as I drew Uptown Girl comic boks and later Uptown Girl  graphic novels, but when The Retros launched a year and a half ago, it was the proper start of my attempt to be a comic strip cartoonist.  Drawing Uptown Girl taught me how to draw, to write, to structure a panel, The Retros taught me about time, pacing, working in small and tight constraints and how to commit to a daily strip.

Trial by fire, I suppose.  I learned what I know by doing.

Over the last two months I’ve been working on developing The Retros into a daily comic strip with the goal of submitting it to a newspaper syndicate.  A start from scratch approach and doing what I really feel is the best work of my life, a true accumulation of everything I have learned in the decades I have been drawing.  Learning from every mistake and learning from everything that worked.  I learned the most from my mistakes.

I really feel excited.  I think this is it.  It may not get picked up but it if doesn’t, then I will hold my head high because I really feel this is the best I can do.  There have been times where I was depressed because I felt like I was already doing the best that I was capable of…and it was just…not good.  At all.

But this time is different.  This is the best I’ve ever done and the best I think I can do.  Not only that, this is exactly what I want a Retros comic strip to look like.

This past week I finished the 20 daily strips most syndicates require for a submission.  I’ll post them as soon as I get them scanned and lettered.  I am currently working on four Sunday strips…strips that are longer, bigger and require much more work.  I have finished 3 of the 4 and I have to say that I think they’re really good.

Originally I started working on the Sunday strips about two weeks ago.  Here’s my first attempt:

After I did this, I sat back and realized I broke one of my personal rules for Sunday strip: Don’t do a Sunday strip that could be a daily strip.

Sure, this is longer than a daily strip, but the joke of the strip could really be condensed to 4 panels or so.  The rest of the strip is chatty dialogue and it just…fills space.  It doesn’t add to the comic, it doesn’t really do anything but take up paper.  Kills time, so to speak.

I got frustrated a bit because I got to thinking that I’ve wanted to be a comic strip artist for a very long time and here it is, my first Sunday pitch submission and it was…lazy.   I didn’t even bother inking it.

I decided to hold off on the Sunday strips until the dailies were done.  I spent a lot of time thinking about them, though.  What does a Sunday strip offer a daily doesn’t?  Space.  A ton of it.  I could draw BIG.  I could draw a lot of panels.  So I started to think about BIG.  I looked at a lot of Jack Kirby art.  What would be fun to draw?  I thought about that and used that as what to structure a Sunday strip around.  What’s big and fun to draw?  Dinosaurs.  What kind of dinosaur fits into The Retros?  A steampunk dinosaur.

So, here are the pencils to next Sunday strip: 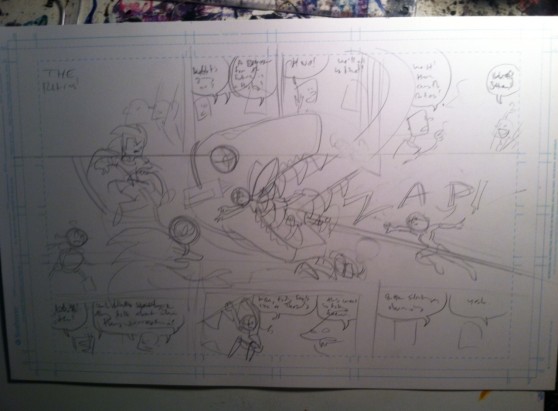 I love the cover that Kirby drew for Fantastic Four #1 and this is my homage to it.  After the pencils were done, I realized I was intimidated at the thought of inking something like this.  But that intimidation meant I was on the right path.

So I started to ink.  Here’s the page about halfway inked.

Yeah!  I was really loving how this was turning out.  Steampunk dinosaurs are not easy to draw, but they’re pretty fun.  My confidence was in high gear and I kept at it.

All in all, it took me about 4 hours to do this thing.  Here’s the final version:

Love how this turned out.  Probably the best comic art I’ve ever done.  I wouldn’t change a thing.  Well, nothing major.

The next day I started the second Sunday strip.  The thought was to create a continuous action scene built around the saying “this is why we can’t have nice things”.  Again, here are the pencils, in progress inking and finished inks: 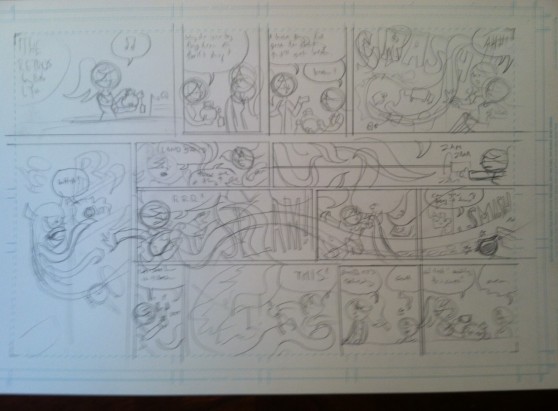 Both of these strips started with the inking of the action parts as they are the trickier panels.  If they didn’t work, I’d hate to start over.

I will post better versions eventually as these are just iPhone photos.  I think both of these strips so far captured a comic that couldn’t be done in a daily strip.

I started to think about the next two, and I decided that the first strip really shows the team as a whole and the second really put the spotlight on Alie and Red’s personality.  The next two would be built around showcasing Lucky, Zoo, and Sputnik.

So far I had a strip that was all about the big and one all about continuous action.  I thought a spy-type story that featured Lucky would be fun.  I wanted to do something different than the previous two strips and thought I would try to put in as many panels as I could to tell a story that really played up some fun back and forth dialogue.  Lucky is fun for that as he picks a fight and bickers with everyone.  I paired him with Sputnik because it’s fun to write the two of them together.

There are 17 panels total in this comic.  Could have done 18 if I divided the first panel in two, but I’m happy with this.  I could have broken this into a few daily strips but I would have lost the momentum and the back and forth conversation.  I like the layout of the panels too.

I have one more Sunday strip left and it will feature Zoo in some way, maybe have it set in a forest to have a change of scenery as well.  Zoo in a forest makes sense.  I’ll work on it this week.  My goal is to have all the artwork scanned, lettered and cleaned up in Photoshop by the end of the month.  In August I’ll work on my pitch submission and start sending it out before August is over.  There are only a handful of syndicates to submit to, so this will not be a very long process.  I have faith in what I created,  however with so few syndicate options, I don’t have a lot of optimism when it comes to finding a home for The Retros in the funny pages.

6 thoughts on “Prob’ly Can’t Do No Better”