The other day I got home late from work and went into my…well, it’s a room dedicated to my artwork and books but seems waaay too pretentious to call it “my studio”.  For years my family has referred this room as my “cave”.  I hate to call it the cave because a few years ago the term “man cave” entered the vernacular and has come to symbolize a space in a house, usually a basement where I hide from my family while I watch the sports and eat potato chips and dammit be a man.

It’s the “cave” because when we lived in an apartment there was a large closet that did not have a door on it that was just wide enough for my drafting (cartooning?) table, my chair and a bookshelf.  My son nicknamed it the Batcave and because we’re all so busy these days it was simply shortened it to “The Cave”.

When we bought a house we were lucky enough to find a place that had another space that wasn’t quite a bedroom but much larger than the closet.  The nickname followed and it’s not something any of us give a second thought to.  I think my daughter assumes every house has a cave.  “Oh, on your left is the laundry room, down the hall is master bedroom and behind us is the cave”.

Anyway, now that we have that out of the way, I went to my cave and didn’t have the energy to start a new Uptown Girl page (I was at my page quota for the week anyway) but I wanted to draw for a bit.  I inked a few panels for The Retros but started to think that soon every night was going to be Uptown Girl-less.  I am up to 131 pages and I think I am comfortable and confident saying I am halfway done.  Usually being halfway done with a book is a good thing but this book has the extra gravity of it being the last and not just the latest Uptown Girl book.  I’ve told myself for a while now that I wouldn’t worry about what was next (besides The Retros of course) once Uptown Girl was all wrapped up.  But now that I think I’m halfway done, I can’t help but think of what’s next.  I’m like this with all parts of my life, though.  On Tuesdays I think about what’s going on Thursday, I’ll eat lunch and wonder what’s for dinner.

What will I do when Uptown Girl is done?  It’s exciting and terrifying at the same time.  My biggest fear is that I would start another series or another comic or even just a one shot graphic novel.  I call it a fear because the idea of jumping into another long project exhausts me.  I’ve been drawing Uptown Girl for 13 years now and although I’ve had a blast, the thought of a year long (or longer) project freaks me out.  I don’t want to do that, but you can’t always control what your creative impulses pushes you to.  I’m terrible with this.  I’ll have an idea pop into my head and two hours later I’ve mapped out the entire story, character or series.  Usually the time Uptown Girl requires puts the brakes on anything like this, but I still get ideas.

It doesn’t help that I’ve been reading comics a little differently lately.  I’ve been reading a ton of stuff by Seth lately and by God I want to do something like this.  I love the simple yet not so simple style. 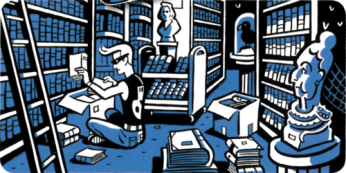 I’m tempted to do something like this in a new book but…again, thinking about a big project just exhausts me.  I might feel different when Uptown Girl is actually done, but the feeling of avoiding a big project (at least for a while) has been a pretty consistent feeling for a while now.

So what will I do?  I’ve said it before but it’s time to get serious about my art.  I know I’m better than what most people see.  This time it’s different because I’ll actually have time.  I won’t have the pressure to complete a 300 page book every year.  Not long ago I wanted to see if I was better than I was and I drew this picture of myself in my cave: 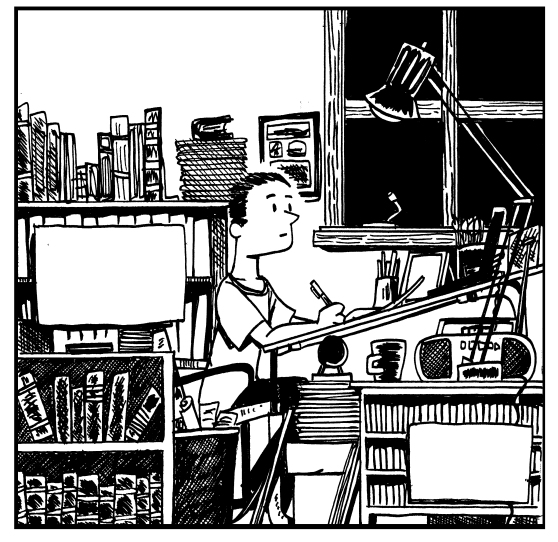 It’s pretty good.  Imagine if I drew that way all the time.  Imagine if I had been drawing this way this whole time.  I left some room in case I wanted to add some captions or narration or something.  See?  I can’t even do one drawing without me thinking it could be a page in a bigger project.  Most people know I got started doing comics because I was trying to be a children’s book illustrator.  Over a dozen years ago, I wrote and poorly drew a book I was shopping to publishers.  While waiting for those rejection letters I decided to take a shot at doing comics.  13 years later my career has taken a different path and although I love comics, I want to do more than comics.  I feel I’ve done as much in comics as I can, and instead want to revisit my illustration goals.  Of course, I still will do The Retros which I consider a comic strip and there is a difference.

Instead of putting together an entire book, I’m thinking I should put together a portfolio.  What would I draw without having a deadline?  Well, like the cave drawing above it, I wanted to illustrate something and see what it looked like if I took my time.  I worked on this piece on and off over a course of ten days or so and I was surprised by how it turned out…and I was surprised that I liked it. 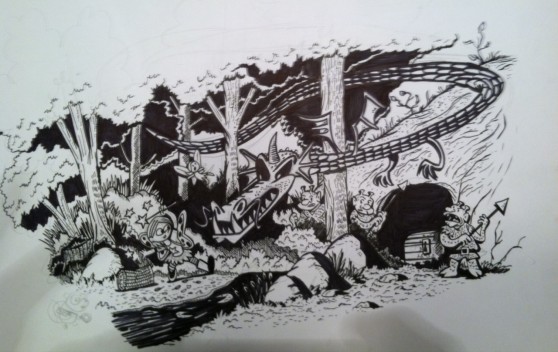 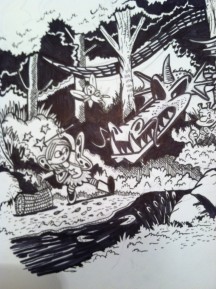 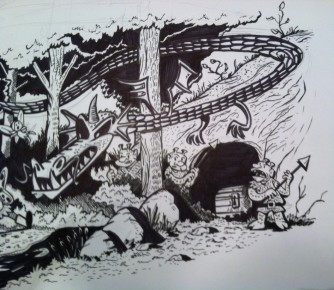 This scene is from the world of a character I created not too long ago.  I love how it turned out.  I wish I had a scanner large enough to capture the whole thing better, but it is what it is.  The plan is (today’s plan anyway, but I think it will stick) is put together a sampling of a dozen or so drawings and send them to agents and publishers.  That’s how it’s done, anyway.  I suppose I should stop putting my faith of being “discovered” online.  That isn’t going to happen.  I used to think if I became a famous cartoonist and had a following it wouldn’t take long for a publisher or The Cartoon Network to call me up and offer me a contract.  I’ve always known that is as likely as…something that’s not likely but I’ve clung to that like someone who…clings to something.  I am hoping that with a little Energon and a lot of luck, I might get a chance to illustrate a book.

And do want to know why I haven’t done things the proper way?  I was afraid of the work.  Which is hilarious and sad to think for someone who has drawn five original graphic novels and over a hundred comics over the course of 13 years.  It’s going to be a lot of work to draw a dozen drawings like this, color them, print them, put together a submission packet and send them away.

But you know?  If I have half as much fun doing those twelve drawings as I did this one, it might not be so bad.  I think what my plan is to draw whatever I want, to draw pictures I like drawing, stuff that doesn’t fit into what Uptown Girl was or what The Retros is.  I’m excited about this for a number of reasons.  For starters, I’m looking forward to doing more stuff like this, and drawing in different styles.  I want to see if I am really better than I am.  Secondly, if I follow through with this, it would be me actually doing what I should’ve done in the first place.  But then again, I learned a ton about drawing over the last dozen years or so, so maybe the timing is perfect.

2 thoughts on “The Cave”