Uptown Girl’s first original graphic novel “Big City Secrets”  is almost ready to be published.  The art is done, the scanning is done, the proofreading is done, but I still need to correct the mistakes.  But for the most part, it’s on track to be published in March.
The last part has been one of the most challenging parts: the cover.  I had an idea for the cover for the past year or so but that fell through, so in the last week I had to scramble to come up with a new idea.  I had a few ideas for the cover but wasn’t sure which way I wanted to go.  The only thing I knew for sure is that I wanted the cover to look as different as possible than the covers to the trade paperback collections.

The trades all had a distinct look, usually a single image against a bright, white background, like this:

It’s a great cover, thanks to my friend and Uptown Girl colorist Ben Mudek, but I wanted “Big City Secrets” to look different.  I roughed out a few ideas and I thought I’d post them.  I had a lot of ideas, but sketched out only 6 different designs.

This first idea was more along the lines of my original idea that fell through.  It’s hard to describe this sketch without trying to explain the original idea (something about a diorama sort of thing), but this was the first idea: 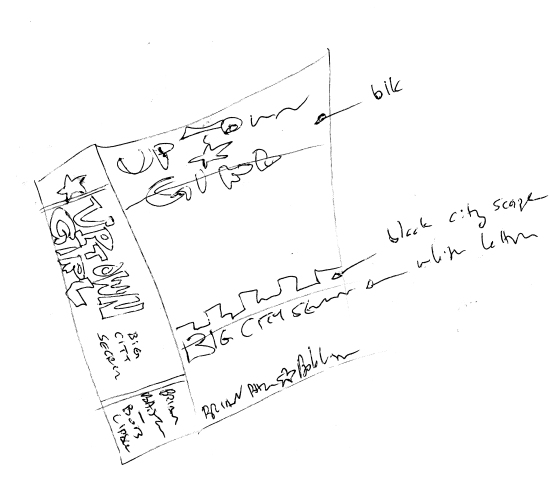 The next idea was trying to play into the words ‘city’ and ‘secrets’ of the title.  The idea was to convey a sense of mystery or something.  The finished piece would be clearer than the sketch, but basically an alley scene with Mr. Roboto creeping in the corner and the Walrus looking heroic in the background.  I’m sure the idea looked better in my head.  I guess it would have to. 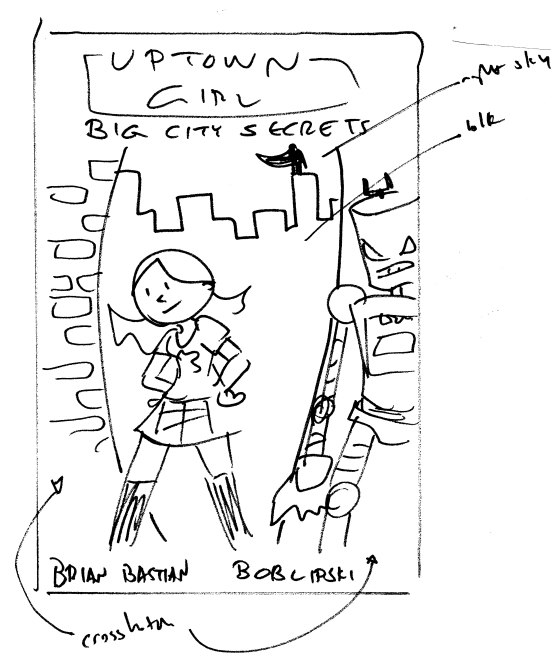 My next attempt was trying to imagine that ‘Uptown Girl’ was turned into an animated movie, and what the movie poster would be like.  I like this idea but there was something just kind of…meh about it.  I worked out a more detailed version of this, but scrapped it and moved on.

My next idea was the worst of the bunch.  Boring. 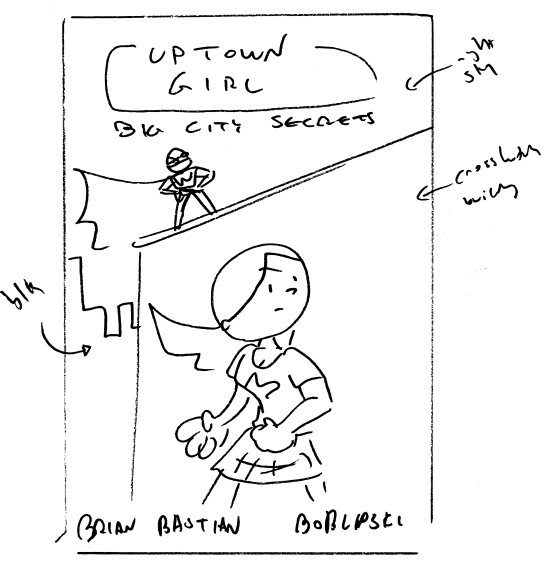 I came up with this next, and I liked it, and I’m not sure why.  It looked different, and I wasn’t sure I could pull it off.  The idea was to have the faces of the Walrus and Mr. Roboto faded in the background and have Uptown Girl in the foreground.  It looked mysterious and I was pretty sure I was close to the final design.  I thought for sure I’d go in this direction.

Except for the first image, I roughed out all these ideas in one night.  I thought I should sleep on it before I committed to anything.  The next day, I decided none of them were really what I wanted, but there were some good ideas here.  I was back to the drawing board, literally.

I came up with a few other ideas, and worked out this idea.  I was pretty much on track for this to be the final idea but after I started to ink it, I thought I’d try one more idea.

I’m glad I trusted my instinct and moved onto something different.  Looking at the above image now, I’m struck by how…boring it looks.  Obviously it’s not finished, but it’s boring so far.  The drawing I did after I quit this idea ended up being the final cover.

So, in the end, I spent a lot of time working on different ideas that didn’t go anywhere, but ultimately I came up with the final cover, the one I like, the one that represents the book the best, I think.

The front and back cover are currently in the hands of Ben as he colors them and works out the final designs.  Once it’s done, I’ll post it here.