If you like books, there’s probably a slim chance you’ll be able to successfully avoid me this weekend.

I’ll be there signing copies of “Cifiscape”, a collection of short stories by Minnesotan writers about what the Twin Cities will be like in the future.  I have a short Uptown Girl story in it called “Ill Communication”. 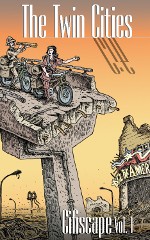 The book is published by Onyx Neon who will have a table at the book fair.  I THINK I’ll be there from 10am until 11am.  Come see me and find out.

After that, I will be heading over to FallCon, the second biggest comic convention in Minnesota.

I won’t be at FallCon until around 2:30, but Brian Bastian will be there selling copies of ‘Uptown Girl’ and his new ‘Tommy Chicago’ trade paperback all day long.

Anyway,  a lot of running around but it’ll be a fun day.