Okay, here it is, my first blog entry.  This blog is a long time coming, I meant to start the blog after the original Uptown Girl series ended as a way of keeping in touch with her fans…but I dove right into other projects and found it hard to make time for anything besides drawing and family.

But the next Uptown Girl book is almost done, so I thought I’d better get on it sooner rather than later.

There’s also a lot of cool stuff coming this month.  MIX (http://mplsindiexpo.com/) is coming up, Lutefisk Sushi D (http://www.cartoonistconspiracy.com/sushi/) is coming up and one other cool thing that is supposed to come out this month, but we’ll see.  More on the later.

Anyway, I’ll have a new comic out for Lutefisk Sushi D.  Here’s what the 1st page looks like: 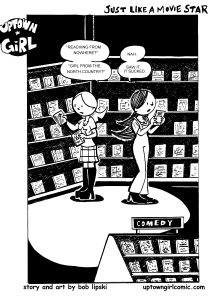 One thought on “Begin the Begin”